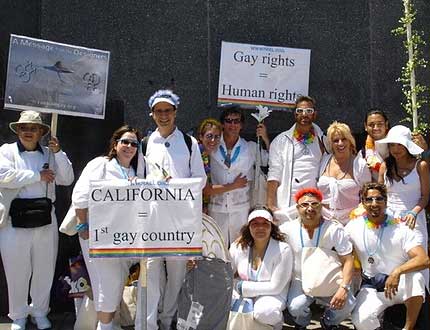 Last week end was gay pride week end in many places.... of course we couldn’t miss the one of San Francisco, J The regional guide, Felix Clairvoyant tells us :

As Raelians in San Francisco gathered to commemorate the Stonewall uprising of 1969, what is widely believed to be the beginning of the gay rights movement, for the first time, the Raelian Movement entered a contingency in the SF Gay Pride Parade, masterfully orchestrated by Craig Fuller with directives from Fabrice and where more than a million people gathered.

Together, Craig and I carried a beautifully designed banner bearing the word ARAMIS - Raelian Association for Sexual Minorities and we were joined by ten family members from around the Bay area dressed completely in white and wearing beautiful butterfly and angel wings. We distributed 2000 fliers to a very receptive crowd. Hundreds of thousands of people were reported to have lined the parade route, many cheering as we passed and offering thumbs up and nods of approval for our additional posters, “Gay Rights = Human Rights,” “Sexual Orientation = 100% genetic,” “California = 1st Gay Country,” and “A Message from the Designers.” Those of us handing out fliers were pleased at how many reached for a flier, even from back rows, asking for fliers, or even, “Are you Raelian?” and smiling.

Even though our contingency was located near the end of the parade gathering, the crowds remained strong until the final contingency passed. And we were equally pleased to be flanked before and after by members of the Green Party and the American Civil Liberties Union (ACLU) respectively. The contingency leader for the ACLU graciously asked us if we had powerful Raelian statements so he could chant them using his megaphone. So frequently throughout the march he would say: “Raelians say “gay rights = human rights” followed by: “Raelian priest will marry you.” or “Raelians, make some noise.” J
From the Parade’s opening contingency to the rear of the lineup, the spirit and sentiment could be felt throughout the crowd, gender equality and human rights for all. This was a tremendous experience for all of us, a joy to be able to share the hope of our Creators in a loving and accepting atmosphere. The climate of acceptance continues to change, demonstrating our need to stay focused on the mission entrusted to our Beloved Prophet.
返回分區   新聞項目
較早的新聞
較新的新聞